Leave everyone you meet better off for having crossed your path and accept the unexpected gifts the universe will place along your path in return.

I have to tell you when I sat down to speak with journeyman rock and roll drummer Sandy Gennaro, this is not the conversation I expected to have.

We talk about Sandy's career in the best seat in the house behind hall of fame artists like Joan Jett, Cyndi Lauper, Bo Diddley, Pat Travers, Michael Bolton and, yes, The Monkees.

We talk about him touring sold out soccer stadiums across Europe with Queen on Freddie Mercury's final tour.

But most importantly we talk about the twisty, serendipitous path that ushered that career into being, how a random favor for a random guy outside a random backstage dressing room door led to him playing on the Tonight Show with Cyndi Lauper and how tossing a pair of drumsticks to a disabled woman in the front row (instead of the hot blonde groupie) led to a new career as a speaker, and how accepting the blessings that come your way led this lifelong New Yorker out of Little Italy and straight into Nashville.

Never blow off the little guy because like the song says "One Thing Leads To Another."

BOOM BOOM: ​​Out go the lights! Yum Yum. Get Ya Some. 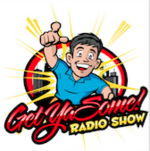 Let's do this thing. The Get Ya Some Radio Show will make its world premiere on Tuesday April 4th. Check your email now to get your situation situated before the big day. T