Football Is The Devil 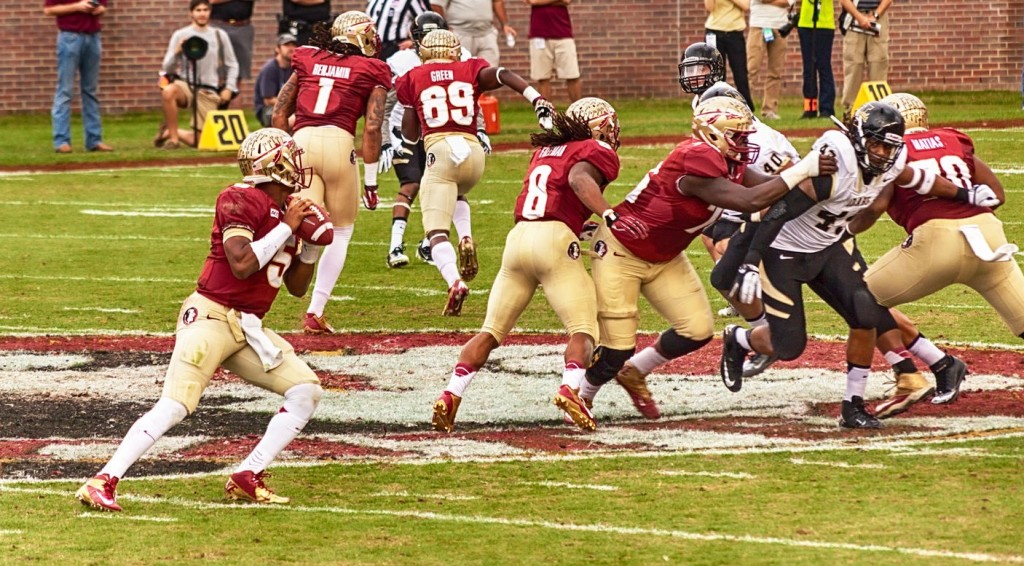 Well, this is it: the saddest day in all of Terry World, the official kickoff of football season. I hate football. In the immortal words of Bobby Boucher’s mama “football is the devil.”

The greatest trick the devil ever pulled was convincing the world that he didn’t exist. His second best trick was convincing us that he smelled like sulphur and looked like a giant red lizard with goat legs. If that were the case, it’d be no problem to see him coming. But the devil is a sneaky bastard all dressed up in the finest clothes, whispering pretty words in our ears.

The devil is a lawyer at a 4 way stop in Mississippi with a shiny guitar and a contract to take our soul and our publishing rights.

Football is something of a national obsession here in the south. Each weekend we gather by the tens, sometimes hundreds, of thousands to cheer on our teams and work ourselves into a frenzy. On college campuses and in the modern coliseums of the NFL, shining monuments to the American free enterprise system almost universally funded by public tax dollars.

But football is a shapeshifter.

Football is all about building a community, right up until the moment, we split ourselves into rival camps. Us versus Them. Tennessee versus Alabama. The Titans versus The Cowboys. We draw the lines and we go to war. Except the lines don’t really mean anything and the sides are completely arbitrary.

A guy I know just spent about 2 week’s salary to have his favorite college football team’s logo tattooed on his arm. It’s a work of art and he got it show his support and loyalty for the team. But here’s the thing: He didn’t go to school there. He’s not even from there. I think he visited campus, that one time. But he’s seen it on TV a ton

My daughters actually attend a major football school here in the south. An SEC team at that. And every home game Saturday, they literally lock themselves in their dorm room to avoid the 100,000 or so fans who take over the campus. The 100,000 or so drunk fans. Most of their friends do they same thing. To those 100,000 or so fans, that’s what college is about. Drinking, yelling, $5 hot dogs and coolers full of cold beer on a crisp fall day. To most actual students at the schools, home games are an anomaly at best and a distraction at worst.

But the devil didn’t invent football for Saturday afternoons in Knoxville.

Football is designed for Sundays at home on your couch…. All…. damn…. day.

Churches let out early so everyone can get home to get the Rotel warmed up.

Football is made for TV mainly because since almost nothing happens it requires very little attention and leaves lots of time to slip in the commercials and promotional announcements.

In fact commercial minutes outnumber football minutes by almost 5 to 1!

An average football broadcast lasts about three hours from pregame commentary to the post game interviews. You even get a half time show. But for the vast majority of those three hours nothing happens. There’s no there there.

In the average 3 hour broadcast there’s actually about 12 minutes of play going on. Snap to whistle.

Now the first time I read that, I didn’t believe. It doesn’t even make sense. Why would millions of people spend three hours to watch 54 minutes of commercials (18 minutes an hour) and 12 minutes of football? But it’s true, I say. It’s true!

I recorded a game on my DVR once and fast forwarded through all the huddles and the replays and the commercials and the in-depth analysis, and yes, I even fast forward through the cheerleaders. I took about 12 minutes to watch the game.

If you do the math, it works out that the actual playing time in a hall of fame football career is about 20 hours.

Legends are made. Fortunes are built. Legacies created. All based on a good solid part time work week.

Football sprinkles crazy dust in our brain and makes us think amazing, intricate complicated things are going on when hardly anything happens at all.

Football makes us think we’re building community and camaraderie and team spirit when it’s just drawing another line to split the world into us and them. One more thing to argue about and distract us from our real, actual lives.

And none of this is meant to denigrate the actual athletes on the field. The men in the arena. They are for the most part shining examples of what we can accomplish with hard work, dedication and focus. They spend their entire lives from Pop Warner leagues on up preparing for those 12 minutes on Sunday afternoon. They’ve bet it all on being at their best in that brief shining moment when it counts.

And less with the nachos.