Anything Can Happen. Anything Happens All The Time. 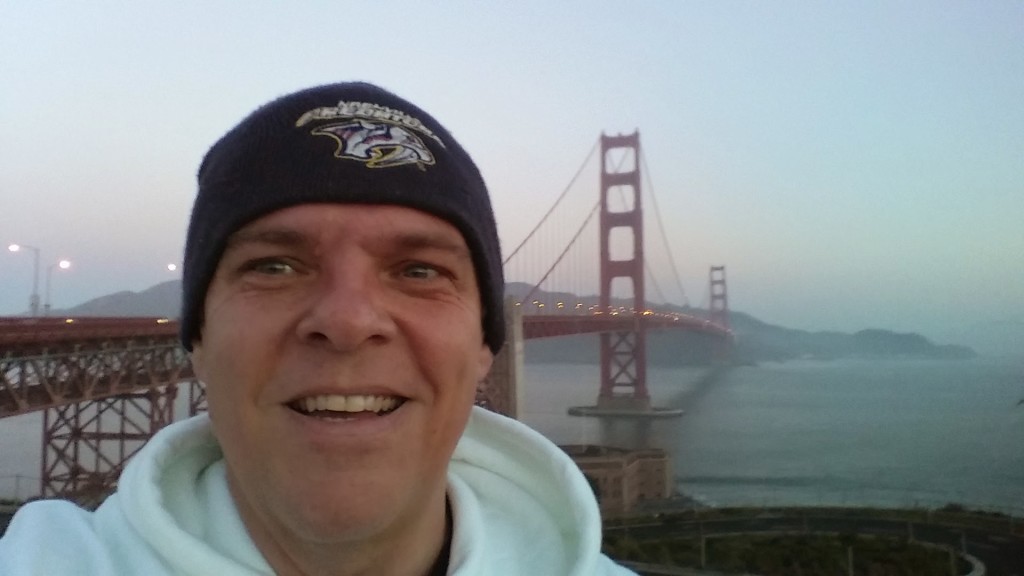 I got up at 5 o’clock in the morning and ran the Golden Gate Bridge.

Anyone who has known me for any length of time, knows what a ridiculous sentence that is. Every word of it is true. It’s still ridiculous.

For the vast majority of my life, 5 o’clock has been a lot closer to bedtime than morning time.

I’ve always been a night owl. When I was a kid, I would hear my dad’s alarm clock go off (around 5:00 am) and I’d quickly turn off the TV, jump into bed and hide under the covers so he wouldn’t know I’d been up all night. I don’t think he fell for it.

For most of my adult life, the bars closed at 3 and Steak N Shake has been open 24 hours a day so crawling into bed around 5:00 am was not an entirely rare occurrence.

I thought my night-owledness was genetic. Built into my DNA. Hardwired. Something that was out of my control. And I’m still not a morning person. But most days now, I’m up and at ’em a couple hours earlier than I used to be, getting shit done. Which leads me to ask:

If I can change that basic core fact about myself, what else can I change?

Then there’s the running. Up until a couple of years ago, I couldn’t run to the mailbox without stopping to catch my breath. I’d never, ever ran farther than a mile. And I hadn’t done that since high school. In junior high school, I was the fat kid struggling to run the field after football practice stopping to walk whenever I was reasonably sure Coach wasn’t watching.

A couple of years ago, I was half a biscuit shy of 300 pounds and I thought being fat and out of shape was who I was. Genetic. Hardwired In. Core.

Last week I ran the Golden Gate Bridge. This morning I ran for the 60th consecutive day. I exercise every day and I’ve lost a good chunk of weight.

I read a chart the other day that puts the amount of weight you’ve lost into real world terms. I’ve lost over 60 pounds which it turns out is the exact weight of the average elephant penis. You learn something new everyday.

But if I’m not the fat kid, who am I? Or more importantly, who can I be?

I’m up earlier, exercising more everyday, in part because I’m not hungover.

I was a drinking man long before I was actually a man. I started on the booze when I was 14 years old and drank with enthusiasm for decades. If there was anything about me that I thought was truly immutable, it was that. I was a partier. I liked to party. I wore it like a badge of honor.

My grandfather was a drinking man before me. I used to tell all my drinking buddies about how every once in a while Granddaddy would swear off the hard stuff and only drink beer for while (drinkers are always making such little bargains). Granddaddy would be ok for while and then he’d go from beer to malt liquor. And then eventually, he’d slip the sixer of Schlitz into the freezer and just drink the pure liquor out of the can when everything else froze. He kept his promise, but he drank himself into an early grave.

I thought drinking was genetic. Fundamental. Hardwired in. But I haven’t had a drink in almost two and a half years.

Before last week, I’d never been to California. I’ve spent 99.9% of my breathing hours within a couple of hundred miles of the dingy hospital where I was born on the banks of the Cumberland River in downtown Nashville.

Most days, I don’t bother to put on pants, much less leave the house.

But last week after I ran the Golden Gate Bridge. After I spoke in front of hundreds of car dealers at the biggest event in the automotive industry. After I fulfilled a lifelong career goal, I was flying back from California on a 787 Dreamliner, sitting in a chair in the sky like a greek myth as Louis CK would say. And I was watching the movie “This Is Where I leave You” on the inflight entertainment system when one of the characters said this line:

“Anything can happen. Anything happens all the time.”

And it does. And it can.

The transformation in my life over the last few years is actually a little surreal. I’m not entirely sure how it all happened. Yes, I’ve made better decisions. But three years ago when I started dragging my fat ass around the block in Tennessee, I could have never imagined running across the Golden Gate Bridge in California. It wasn’t something that was in the realm of possibility.

But it happened. It happens all the time.

And forgive me if I get a little hippy dippy on you for just a minute, but here’s what I think I’ve learned.

Anything really can happen. The universe is made out of infinite possibilities. Everything you can imagine and amazing things that you could never imagine in a hundred years of imagining are all swirling around in a giant cloud of uncertainty just waiting for you to will them into existence.

Life is an amazing, neverending series of Miracles just waiting for you to set them in motion.

So what are you waiting for?

RELATED POST: How I Ran 3 Miles Without Stopping, Walking Or Having A Freaking Heart Attack. And What I Learned

Terry Lancaster is the VP of Making Sh!t Happen at Instant Events Automotive Advertising. He writes and speaks about marketing, entrepreneurship and personal performance – i.e. selling more stuff, making more money and being better at what you do and who you are. He is a husband, a father and a Beer League Hockey All Star, as if there could ever be such a thing. Connect with Terry Lancaster