The Last Samurai: How An American Warrior Changed Japan And How That Changes You 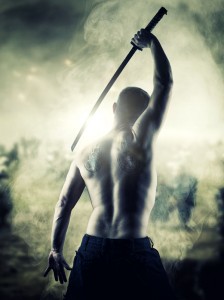 In 1940, America was braced for war. Europe was engulfed and we were sure to follow. We just weren’t ready.

We didn’t have the manufacturing capabilities needed to build the machinery of war. The men with the know how to get the job done done were  soon to be heading for the frontlines. And the economy was still reeling from a decade long slump. Without money or manpower, we couldn’t count on new factories or great leaps forward in innovation.

The department of war created programs to consult with important industries who were being challenged by the loss of manpower and the flurry of demand. One of the training programs encouraged manufacturers to NOT place their efforts into radical, innovative techniques to meet these new challenges.

Instead they should should concentrate on continuous improvement.

“Look for hundreds of small things you can do to improve. Don’t try to plan a whole new department or go after the big installation of new equipment. There isn’t time for these major items. Look for improvements on existing jobs with your present equipment.”

Do what you can with what you have. Right now. Right where you are.

This strategy must have seemed like so much tilting at windmills in the face of Germany’s warring and manufacturing prowess. We were pitting the lowly suggestion box against German Panzer tanks.

Little by little, though, we got better. Our speed of production increased. Our quality control improved. We shipped men and machines halfway around the world and secured the economic dominance the US has enjoyed for the last 70 years.

Meanwhile in Japan, after the war, their manufacturing capability had been destroyed. Completely.

General Douglas MacArthur was commander of the occupation forces in post war Japan and he needed a strong economy, especially transportation and manufacturing sectors, to bolster his forces against the looming Communist threat in China and North Korea. Japan was too vital to leave in a weakened state.

MacArthur saw the same dire need for manufacturing improvement that the Department of War had seen in the US economy in 1940. So he brought in the same programs to solve Japan’s biggest  problems one little problem at a time.

As the Japanese economy bounced from the post war years when “Made In Japan” was an insult and a trade barrier to the 1980’s when Japanese manufacturing and management techniques were the toast of the corporate and financial worlds, the decidedly American management philosophy of continuous improvement became ingrained into the Japanese business culture as the concept of KAIZEN.

Kaizen is widely credited with the Japanese Economic miracle of the late 20th Century .

And American re-adaptation of these “Japanese” techniques in the 80’s and 90’s helped the quality turnaround in US manufacturing. When Ford marketing people noticed that consumers were requesting Japanese made engines even though they were buily on the exact same specs as the American made engine, their engineers found that, while all of the engines were built to spec and within the allowed tolerances, the Japanese engines were built to within tolerances twice as exacting, 1/16th of an inch as opposed to the required 1/8.

American companies had faced little competition in the post war years and had seen little need for continuous improvement. Those days were over.

These days, management consultants say there are two strategies for creating change:

We face the same choice creating change in our personal lives.

It’s easy to swing for the fences and look for the one magic bullet: the mystical weight loss program, the miracle diet, the thermogenic califragilistic workout system that can triple our metabolism and cut our body fat in half.

We’re looking for radical change, the one saving grace that will at long last turn our lives around.

But there is no magic bullet.

There is no miracle diet.

There is no great innovation that’s going to change the life you’re living now into the life that you were born to lead.

There’s only you. And the hundreds, thousands of decisions you make every day. And the simple truth that if you can start making just a few of those decisions, better decisions, then you can change your life in ways you’ve never dreamed.

RELATED POST: Perfection Is An Illusion And An Obstacle