I was driving home the other night from an after work function, around 8 o’clock or so and I was starving. Not starving in the third world country sense of the word, but starving in a middle aged, chubby suburban kind of way. I hadn’t eaten since lunchtime and I was seriously ready for a big mac, a quarter ponder, chocolate shake and, yes, I would like fries with that.

The entire $120 billion fast food industry has been built on moments just like those, I was in my car, pre-occupied with food. Too tired to cook and too hungry to wait. I was looking for the nearest exit with golden arches when a momentary fit of self discipline kicked in.

I have a little spreadsheet I keep on my desk of things I’d like to accomplish every day and one of them is EAT 3 VEGETABLES. I would have been perfectly willing to drive-thru for a Fast Food Fix, but I hadn’t filled my quota of veggies for the day, Time for Plan B.

Plan B was to stop for take out at Pei Wei Asian Diner. Pei Wei attempts to fill the gap between fine dining and fast food. Kind a good food fast concept and it’s not bad. One of my favorite “healthy” meals is a trip to Pei Wei for a quick take home meal, but instead of the usual pile of rice and noodles, I’ll have them hold the starch and load up the plate with extra veggies and protein, then make it extra spicy for a little added metabolism boost.

Of course the sauce is still loaded with sugar so it’s not like I’m eating off the weight watchers menu, but it’s not fast food and I get to punch my vegetables card for that day.

A trip to Pei Wei casts 2 or 3 times what a run for the border costs. But it’s almost as fast and, hey, at least it’s real food.

So I’m off the interstate, driving past the Golden Arches and on my way to Pei Wei, planning my order in my head. When Plan C hits me.

Sitting at home in my fridge, I’ve got a week old bag of brocolli, some left over chicken, some salad green, carrots, snap peas and onion that are all on the verge of being tossed in the garbage.

Between leftovers and food we never got around to actually cooking in the first place, Americans, especially busy, chubby, suburban Americans, throw away almost as much food as we actually eat.

So plan C was leftovers. Because Veggies. And instead of dropping $10 -$15 bucks on take out, I get to eat for free, because otherwise it all gets tossed. Everybody likes free.

But there’s still the question of time. I’m still starving, I still don’t have the time or the willpower cook. I still want food and I still want it fast. This is where the 3 simple words come in.

If you want to save time on meal preparation. Save money by using leftovers. Save the planet by throwing away less food. Eat healthier by eating more vegetables and proteins and lose weight by cutting the starch and sugars out of your meals…

I got home, threw the wok on the stove to heat up, splashed in a little canola oil and then opened the fridge for leftover heaven.

Broccoli, Carrots, Snow Peas, Onions, Red Bell Pepper, some salad greens, a couple of pieces of cold chicken, a dash of soy cause and a good 2 or 3 dashes of my old Stand by, Frank’s Hot Sauce and BAM!!! 10 minutes from the time I hit the door, I was dipping my chopticks into some primo Chicken Ala Terry. 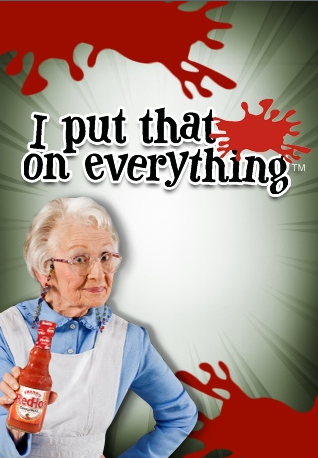 I didn’t cost me a dime that wasn’t already spent. It was quick enough that I resisted Roy Kroc’s siren song on a sesame seed bun. And best of all… It was good eating.

The newspeople love to talk about how expensive real food is, and sure, it costs a little more than the 99¢ value menu, but it’s REAL FOOD.

You can just about fill up the crisper with fresh veggies for what a single meal at the nearby good food fast joint costs. That and my handy, dandy, well oiled, well seasoned wok will keep my belly full all week long.

And I get to punch the veggie card every day!