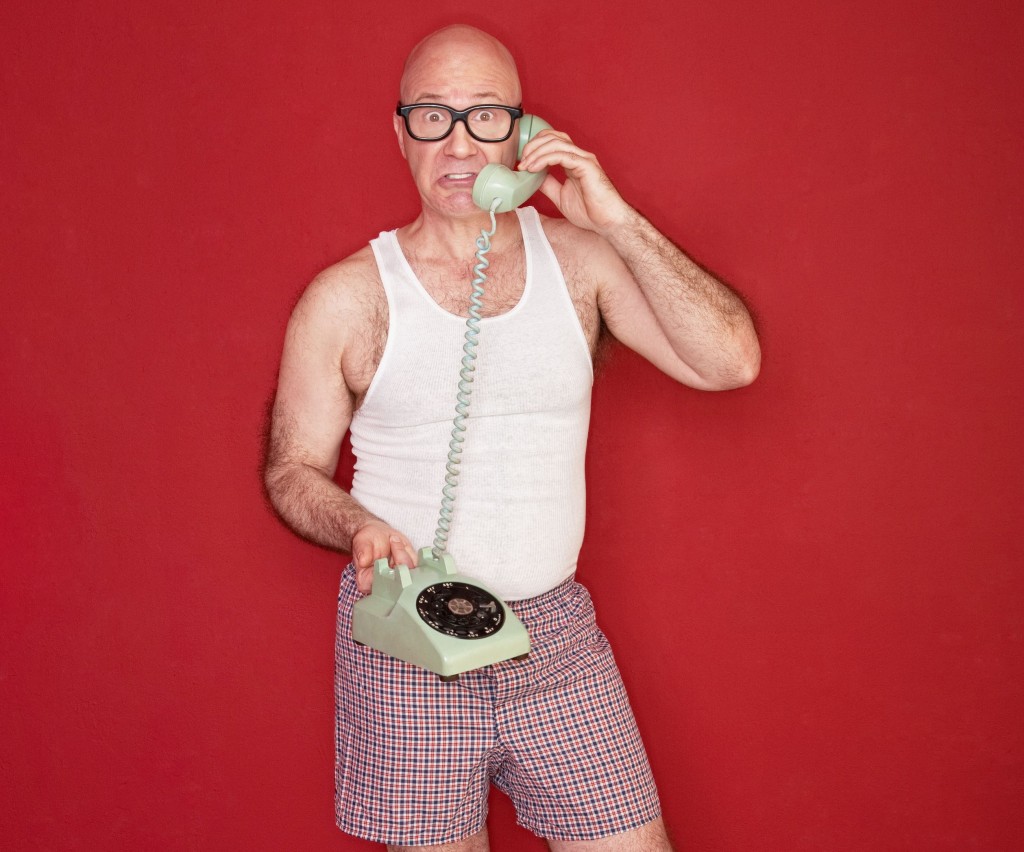 I had been invited to speak at a sales conference in Dallas, my first ever public speaking engagement. And I was scared out of mind. I spent months writing and practicing my speech, going over every line, every word, every pause. Finally the moment arrives and I fly into Dallas for the opening day of the conference.

Except my luggage doesn’t make it.

I spent the entire first day of the conference, including the cocktail party and the meet and greet, in shorts, flip flops and a cheap knock off a Charlie Sheen bowling shirt.

“Hi everyone. Meet Terry. He’s our world class marketing expert. He’s going to be sharing all his knowledge and wisdom with you. And he can’t afford big boy pants.”

The entire day felt like a bad dream. I just never woke up.

Finally my luggage arrived that night. When I was introduced on stage the next day, I was in complete professional attire and I went on to deliver a perfectly mediocre presentation.

Between the luggage debacle and my lackluster performance, I haven’t converted a single person who was in that room into a customer. That’s the bad news.

The good news is over the past year, because of that speech, I’ve made an extra $15 to $20 thousand dollars.

I made that extra profit the same way I landed that debut speaking gig in the first place: creating and sharing content on social media.

The Three C’s of Social Selling

Willie Sutton is often quoted as saying he robbed banks because “that’s where the money is.”

In 2015 if you’re in the business of selling stuff, the money, and your customers, are on social media.

2 out of 3 Americans use social media.

40% of Americans use social media EVERY DAY.

And people who use social media spend an average of 2 and a half hours per day tweeting, pinning and liking pictures of grumpy cats.

And you don’t need to put on pants.

You only need to do 3 things

It’s Google’s world and Google has spoken: Content is king.

Back in the days before Al Gore invented the internet there was saying “Perception is reality.”

Here’s another one: “You never get a second chance to make a first impression.”

And for the trifecta: “Clothes make the man.”

The meaning is clear, and as anyone in marketing will tell you – Packaging Matters!

Twenty years ago which navy blue suit you wore to the local Rotary club meeting played a large role in what the community thought of you. Who they thought you were.”

In today’s world you are who Google says you are.

Go ahead. Google yourself. Who does Google say you are? Does Google even know you exist?

If Google can’t find you, how on God’s Green Earth do you expect your customers to find you?

Ten years or so ago, I had a client who ended up changing employers and wanted to use my service at the new dealership, but he couldn’t remember the name of my company, only mine. And he couldn’t find me by name on the interwebs. I lost a couple of years worth of revenue before we finally were able to get back in touch and I swore that would never happen again.

That was the day I registered the domain name for the blog you’re reading right now – TerryLancaster.com and began creating content to create myself.

Today when I Google myself, I generally occupy eight or nine of the 10 listings on the first page. Google says I’m the VP of Making Sh!t Happen at Instant Events Automotive Advertising. Google says I’m a speaker, author and entrepreneur.

Google tells the world who I am. And I tell Google by creating the content it craves.

I’ve even got a MySpace page somewhere.

I’ve got friends in the car business making well into six figures a year selling cars because they’ve stepped out onto a limb, creating content, sharing it widely and becoming a known figure in their local community.

And I’ve got other friends who have bought their salespeople ipads, sent them through social media training and encouraged them to create their own personal brand, their own business within a business. A scant 2 out of 10 might get started. 2 out 100 might keep at it. Some don’t want to put in the work. And some want to remain anonymous online. I guess they’re bashful.

You don’t have to be Shakespeare – just start writing.

You don’t have to be Steven Spielberg – just grab your phone and start making videos.

You don’t have to be Paul Harvey – just grab a microphone and tell everyone the rest of YOUR story.

Take a chance. Put yourself out there. Sing The Song Of You.

The Three C’s Of Social Sales 2: Connect With More Customers