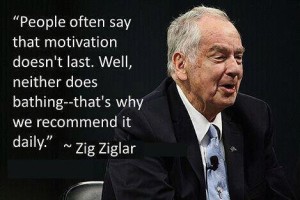 “People often say that motivation doesn’t last,” according to motivational legend Zig Ziglar. “Well, neither does bathing, that’s why we recommend it daily.”

That makes for a nice motivational poster or instagram meme, but it turns out that people are right. Motivation doesn’t last because change is hard and motivation decreases over time as we figure out exactly how hard change is.

In fact, Stanford Professor B.J. Fogg has developed a formula to express exactly what affects our behaviors. Motivation (how much we want it) turns out to be only one leg of the stool.

When it comes to behavior, motivation is intricately related to ability (how difficult something is for us). Motivation decreases according to how difficult the behavior is. We may want to run a marathon, save for retirement and rebuild the 71 Cutlass sitting in our garage, but if those things don’t come easy for us, our brains will make the decision to pick up the remote instead of picking up the wrench and we’ll be back in front of the tube for the long haul.

Relying primarily on motivation to change your behavior long term is a losing strategy – B.J. Fogg

Fogg has gone on to develop a system for changing behavior that minimizes the impact of motivation and relies on the other two legs of the stool.

He wants you to start so small the activity can be done in 30 seconds or less. And the activity must cause no pain. If it’s painful, your mind is going to figure out the perfect excuse to help you avoid the pain. We don’t like pain.

You have to DO something to get something and Tiny Habits is about the doing.

Do the right thing and the right results will follow.

“Yeah, but how am I going to get in shape or lose weight doing one pushup?”

That’s a valid question. And the answer is this. Success breeds success. Accomplishment creates confidence. And repetition creates aptitude.

So going back to his magic formula, every minor victory increases ability and lowers our need for higher doses of motivation.

Fogg has gone from struggling through a couple of push ups in a row to knocking out 60 or 70 in a day.

We’ve all started out on projects, only to get overwhelmed and let them slip to the side.

Tiny Habits advocates the polar opposite approach. Choose an activity so simple, so easy that it’s virtually impossible to fail.

I read of one participant in the program who just committed to the simple act of putting on her running shoes every morning, and often going back to sleep after she did. But eventually, once the lacing up of the shoes became an ingrained habit, she decided that since the shoes were on anyway, she might as well go for a run.

Doing one push up isn’t a magic bullet.

We know what we’re supposed to do.

I have a sales trainer friend named Jim Ziegler (no relation to Zig) who often says that salespeople don’t have a knowing problem. They have a doing problem.

We know what to do. But most of us don’t do it because we don’t have motivation sufficient enough to overcome the excuses our brain throws out there.

We can listen to motivational speakers to get us through one more day and we can aim for behaviors so small that we almost have to do them. But the real mojo happens when our sporadic burst of good behaviors become deeply ingrained instincts.

We need good habits that propel us through the day and on toward our ultimate goals.

What we need is automaticity.

I’ve got a degree in English Journalism and I’ve made a living putting words together in pleasing order for the last 30 years, but I have to admit the first time I watched Fogg’s TED talk, I had to stop the video and go look up automaticity, not to understand what it meant, but just to make sure it was really a word. It is.

Automaticity (Noun) // The ability to do things without occupying the mind with the low-level details required, allowing it to become an automatic response pattern or habit. It is usually the result of learning, repetition, and practice.

Fogg’s research had shown that we need a trigger, a call to action, to inspire us to enact behaviors, but his biggest breakthrough came getting dressed one morning. He opened his sock drawer, removed a pair of socks, and closed the drawer without thinking and was struck by the power of the word AFTER.

We all have hundreds, probably thousands of tiny actions that we complete every day without thought and we can use them as the triggers for the habits we’re attempting to create.

We can program our brains just like we program a computer:

If This, Then That

Each line of Tiny Habits code, then looks something like this:

AFTER I (current habit), I will (desired tiny habit).

AFTER I open the drawer, I will close the drawer.

AFTER start the coffee machine, I will put on my running shoes.

And my personal favorite from Fogg’s life which I have now incorporated into mine:

Push ups have always been a problem for me. I’m built like a little teapot (short and stout) so I don’t have a lot of leverage to lift my eighth of a ton up into the air. But after less than a week of doing one push up every time I urinate, they’ve gotten noticeably easier. Little wonder, I’ve done more push ups in the last 5 days than I’ve done in the last 5 years because it’s simple and because, now that I’ve got a trigger (SFX: toilet flushing), it’s automatic.

But even the magic sound of the toilet flushing isn’t enough to get my new pushup habit to stick around for good, according to Fogg. For that, we have to become addicted to the new habit. We have to crave doing a pushup or marching in place or making that one extra sales calls. And that’s the easy part. Our brain has an addictive personality. It’s hardwired to release the most addictive substances on the planet – serotonin and dopamine. And all he have to do is trick our minds into thinking we’re happy.

So every time we complete our tiny habit, we have to do a tiny celebration.

We can give ourselves a thumbs up.

We can say “I’m Awesome”

Whatever it takes for our brain to recognize that we’ve done something worthy of celebrating and release all that happy juice.

And soon enough our brain will link the new behavior to the ensuing flood of happiness and Voila! a new habit is born.

So now it’s not enough that every time I pee I drop to the floor (No, not the bathroom floor! I go to another room.) for a pushup.

I have to pee, drop to the floor for a push up and then stand up and do a little happy dance, arms in the air, raising the roof “Woot! Woot!”

That’s what works for me, anyway.

Fogg has set up TinyHabits.com to help implement the strategy using your own habits, triggers and celebrations.

RELATED POST: Quit Trying To Get Into Shape And Just Be The Shape You’re In Better