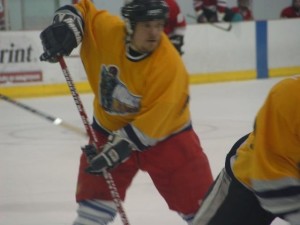 Someone asked me once why I liked hockey so much. This was way back, before I had the slightest idea what Zen was or had any idea at all about meditation or being one with the universe. What I told him was this:

When I’m playing hockey, there’s no room for anything else in my head. I don’t have time to think about anything but chasing the puck and trying to avoid bodily harm.

The guy who asked me the question was mainly confused that I didn’t share his passion for golf. I explained that golf to me, was three hours of my mind wandering, focusing on anything and everything except the task at hand, interrupted a few times to swing a stick.

Football’s probably even worse. I’ve timed a football game using a DVR and fast forwarding through everything except the parts where they’re actually playing football – running, passing, kicking, tackling. Turns out that it takes about three hours to play 11 minutes of football. And since the players are divided between offense, defense and special teams. Each player probably is actually playing football for just about 5 minutes. That leaves a lot of time for the mind to wander.

But hockey is almost all non-stop action from the moment your skates hit the ice until the moment your ass hits the bench. Your mind doesn’t have time think about anything but playing hockey. Pucks are whizzing around, grown ass men are careening by at the outer limits of their speed, agility and control. There’s no time to think about the ass chewing your boss gave you earlier that day or the argument you had with your wife or whether or not you remembered to pay the credit card bill in time to avoid the late fees. For the 90 seconds or so that you’re on the ice, hockey is all there is.

And for the 90 seconds after that you’re trying to catch your breath.

Then your buddy comes flying over the boards, your skates land back on the ice and you’re lost again in the world of stick and puck.

If that’s what happiness is then I can honestly say I’m never happier than when I’m playing hockey.

Ancient Chinese monks and that Grasshopper dude from Kung Fu might call it ZEN, but Modern day psychologists call it FLOW, the mental state when you are fully immersed in an activity – engaged, focused and energized. Lost in the moment.

Have you ever been driving down the interstate, basically driving on autopilot, so lost completely in whatever inner narrative is going on between your earholes that you just drive right past your exit?

FLOW is the exact opposite of that: When you are so consumed by the task at hand that there’s no room in your head to think of anything else. Except that thinking isn’t exactly the right word.

When you’re in a FLOW state you’re not THINKING of anything, you’re just doing. Being.

Malcolm Gladwell’s book BLINK is about our ability to think without thinking, how sometimes we just know the right answer. We know what to do. Especially when we’ve reached FLOW.

I tell all the guys on my hockey team “There’s no thinking in hockey.”

“Davey’s breaking, I should pass to him.”

“The goalie is a leftie, I need to deke left and go backhand to his glove side.”

If you have time to think that thought, you’ve missed the opportunity to do that thing.

And if two equally good options present themselves at the exact same moment – Pass to Davey or go glove side on the goalie, sometimes your brain will stutter step, attempt to think on its own, completely average the two options and you’ll end up splitting the difference and shooting the puck almost exactly halfway between Davey and that damn lefthanded goalie.

I have no scientific corroboration for this, nor any idea what you would call the phenomenon, but I’ve seen it happen a thousand times. Not thinking is harder than it sounds.

A lot of what I used to chalk up to being lucky on the ice is actually a result of this thinking without thinking, FLOW.

The ancient chinese monks from Kung Fu have another phrase for this too: wu wei, which translates roughly as action without action.

There’s a story about the Yoga instructor whose student complained that no matter how long he practiced Yoga, no matter how hard he tried, he couldn’t reach enlightenment and maybe the instructor should teach him something new to help.

The instructor told him to “Quit trying so hard and just do the damn stretches.”

I’m pretty sure that’s what Yoda meant when he said “There is no try. Either do or do not.”

Trying is concentrating on the outcome. The expected result. And expectations are the enemy of happiness.

Doing focuses your mind, your body, your entire reality on the activity, on the task at hand.

If you want to lose yourself in the moment,

If you want to get more done,

If you want to reach FLOW.

Terry Lancaster is the VP of Making Sh!t Happen. Speaker. Entrepreneur. And Author of BETTER! Self Help For The Rest Of Us. He’s a husband, a father and spends most of his free time, like all true native southerners, at the ice rink playing the hockey.