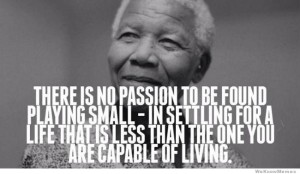 After 27 years in prison for his actions in the fight against apartheid, after being released from prison and awarded the Nobel Peace Prize for that same battle, in 1994 Nelson Mandela was elected as the first black president of South Africa and stepped behind the podium with the eyes of the world upon him and said these oft-quoted lines:

It is our light, not our darkness, that most frightens us.
We ask ourselves, Who am I to be brilliant,
gorgeous, handsome, talented and fabulous?

Actually, who are you not to be?
You are a child of God.

Your playing small does not serve the world.
There is nothing enlightened about shrinking
so that other people won’t feel insecure around you.
We are all meant to shine, as children do.

We were born to make manifest the glory of God within us.
It is not just in some; it is in everyone.

And, as we let our own light shine, we consciously give
other people permission to do the same.
As we are liberated from our fear,
our presence automatically liberates others.

For the last 20 years those words have been attributed to Mandela’s inaugural speech, yet he never uttered them.

“As far as I know, [Mandela] has never used the quote in any of his speeches, and we have catalogued about 1,000 thus far,” says Razia Saleh, an archivist at the Nelson Mandela Center of Memory.

The lines have been quoted under Mandela’s name in the movies Invictus, Akeela and the Bee and Coach Carter. They’ve appeared in books. And upon Mandela passing today, they appear in a flood of well meaning social memes.

The passage is actually from the 1989 book A Return To Love: Reflections on the Principles of “A Course in Miracles” by self help author Marianne Williamson. Even she is at a loss to explain how the passage came to be so fully associated with Mandela.

“As honored as I would be had President Mandela quoted my words, indeed he did not. I have no idea where that story came from, but I am gratified that the paragraph has come to mean so much to so many people,” says Williamson.

I first stumbled on this passage a little over a year ago and was deeply touched because it rings so true. Each of us is a miracle. Stronger and more powerful than we could possibly imagine, and yet we mostly coast through life accepting the millions of blessing we are given… as a given.

Coasting is easier than living up to our potential.

Coasting is the norm. Trying to live up to our true potential to be the true miracle that we are, well, that’s just uppity.

The fact that Nelson Mandela never spoke the words do not make them any less powerful, Nor does it take away from his greatness. His life was inspiring enough.