Underdogs, Misfits and The Art of Battling Giants 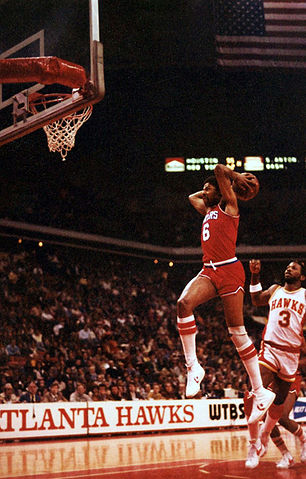 In 1971 Julius Erving wasn’t just a giant in college basketball, he was literally playing a different game, singlehandedly inventing the modern, above the rim style while earthbound mortals could only stand by and watch.

During his 2 seasons at the University of Massachusetts, Erving, better known as Dr. J, AVERAGED over 30 points and 20 rebounds per game.

In January of 1971, The Umass Redmen were 11-1 and hadn’t lost a game on their home floor in over a year when Digger Phelps brought his Fordham Rams into The Cage, UMass’ legendary arena in Amherst.

This was truly a battle of David and Goliath.

Phelps’ squad was a rag tag collection of Irish and Italian kids from Brooklyn and the Bronx. They had little height to begin with and their tallest player had gone down weeks before with a season ending injury. Most of the other players stood little above 6 foot tall and none had the gravity defying skills of Erving. They never stood a chance.

Fordham came out in a full court press from the opening buzzer, swarming Erving and the other Redmen like hornets, never conceding an inch of ground, battling for every ball.

“It was unbelieveable how they covered ground,” says basketball coaching legend Rick Pitino, who was a freshman riding the bench for UMass during that game.

Phelps sent one scrappy New York kid after another to guard Erving. And one after another they fouled out, but Dr J was contained and Fordham won the game 87-79.

The giant was slain.

“There’s no way they should have beaten us,” says Pitino. “Nobody beat us at The Cage.”

In his new book David And Goliath, Malcolm Gladwell tells this story and others that show how sometimes what we see as strength is a weakness and what we perceive as weakness can be our greatest weapon.

When Goliath stepped into the valley below the Israelites and called out for battle, his overpowering size and strength became a weakness because the Israelites had no one who could battle him in the way he was expecting.

They couldn’t compete on his terms so they changed the rules.

They sent a slight shepherd boy into battle, a boy the giant could crush as soon as he got within arm’s length. But David never intended to get within arm’s length because he carried a weapon capable of protecting his flock from hungry predators at over 200 yards – the sling.

The sling was artillery. The giant was infantry. He never stood a chance and as soon as he saw David reach into his pouch, he would have known it.

David slayed the giant by changing the rules and playing to his strengths not Goliath’s.

Fordham knew they could never fly so they ran Dr. J and UMass into the ground.

Gladwell is a masterful storyteller who weaves dozens of stories like this into his tapestry.

A dyslexic who could barely read so he learned how to truly listen and talked his way into hundreds of millions at Goldman Sachs.

A child raised by a nanny whose name he can’t remember, raised without affection and never mastering the basic human art of empathy. Yet as a doctor, he was able to find an effective treatment for childhood leukemia because he was the only one willing to put the children through enough pain and misery from chemo treatment for it to become effective.

But overwhelming strength can become a weakness.

Gladwell shows how and why our decades long experiments with smaller class sizes in education and mandatory sentencing in law enforcement have both been colossal failures. Too much of a good thing.

And even why the surest of sure things, an Ivy League education can backfire.

Gladwell shows that there are no insurmountable odds, no unslayable dragons. There’s always hope.

And on the same page he shows how our fantasies of enough are misguided.

There is no peace through superior firepower.

Someday, someone, somewhere can come along and change the rules and all our advantages will crumble as dust.

You have to learn to fight your fight. To play your game.

And at the end of the day, there are no guarantees. Only will.

RELATED POST: Are You Willing To Chase The Bus?