It was the Tweet heard ’round the world and possibly the best $1,000 spent in the history of marketing.

Late one Sunday night in November of 2009, Lady Gaga drove past the Best Buy on West Hollywood Blvd., spotted a throng of fans camping out for her autograph session the next day and tweeted this

“Sending all my little monsters little pizzas for waiting all night for me at best buy, I hope you’re hungry … eat up I love u!”

Then she dropped a grand on Papa Johns pizza for her fans.

In the words of Mack Collier, author of THINK LIKE A ROCK STAR: How To Create Social Media and Marketing Strategies That Turn Customers Into Fans:

She did something amazing for the people that love her.

Throughout his book, Collier tells stories like this to point out the main difference between rock stars, who are somehow able to sell without selling and businesses:

Instead of focusing on creating new customers and changing behaviors, rock stars focus on turning customers into stark raving, screaming fans by rewarding behaviors that their customers are already doing.

Lady Gaga didn’t run ads leading up to the Best Buy event offering free pizza to anyone who showed up. She rewarded those who showed up on their own who then proceeded to all tweet and youtube and faceboook it ad infinitum. They went home and told all their friends about and are all now fans for life.

The first part of the book outlines why rock stars have fans instead of customers:

1) Rock stars are fans themselves.
2) They look for ways to shift control to their fans
3) They find the bigger idea behind the music they create
4) They embrace and empower their fans

The final section of the book offers detailed specific instructions on how business and brands can set up influencer outreach programs to turn customers into evangelists like Dell, Patagonia, Maker’s Mark and Moleskin have done. 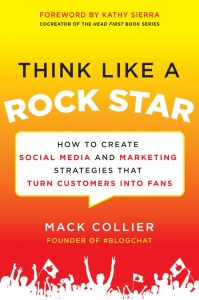 But the most useful part of the book comes buried in the middle section on understanding and connecting with your fans.

Chapter 6 is devoted to handling negative comments. In today’s social media world, customer reviews are the lifeblood for many industries from car dealerships to publishers. Enough negative reviews can kill your business, and Collier offers a detailed 7 point plan for exactly how to respond to squelch the negative feedback loop before it starts

Think Like A Rock Star should be required reading for that most un-rock-star-ly chapter alone.

RELATED POST: How To Win Friends And Influence People Online In 3 Free And Easy Steps