Sober October: How 31 Days Without Booze Led to a Whole Year Without a Hangover

So I’m walking toward the door and my buddy’s yelling at me from the bar.

“T, let me drive you home, dude. You can’t drive. I’ve never seen you this drunk.”

I scoff at him, drop my keys, stumble, pick them up and walk out the door. “Don’t worry, bro. I got this.”

He turns around and goes back to hitting on the (formerly, slightly attractive) meth addict sitting at the bar and I get behind the wheel of my car.

Or at least I assume I drove home because I honestly have no recollection after leaving the bar.

They apparently also decided to clean my pool and then leave my blue jeans, along with my keys, wallet and cell phone, in a pile in the basement for an early morning game of hide and seek.

All I know for sure is that when I woke up, I felt as if someone had driven a railroad spike into my skull, right between my eyeballs. Again.

Hank Williams, Jr sang that “Hangovers hurt more than they used to.” Truer words have never been spoken. I’ve been nursing hangovers since I was a teenager. I had it down to a science. But over the last few years they had gotten progressively worse and were regularly turning into 2 or even 3 day affairs.

So that morning I started doing what I always have done in that situation. I start negotiating and praying.

And If I did accidently drink again, I’d only drink beer. No more Patron and Fireball shots for me.

It’s beer only from here on out. In fact, I’ll only drink light beer, Coors Light, even. Hell that doesn’t even count.

Of course, I don’t believe the words, even as I say them. I try to rationalize why the night before “had gotten away from me.” Maybe I hadn’t eaten enough. I had lost a little weight and I was laying off the carbs, maybe that had affected the way my brain was processing the sugars in the alcohol.

Maybe I was just getting old.

I’d been drinking since I was 14 years old and prided myself on knowing my limits – being able to get just hammered enough to avoid serious consequences.

I had actually been attempting to moderate myself. DRINKING LESS was one of the 21 Tweaks I had been working on. But drinking less was just setting me up for failure by decreasing my tolerance and letting things “get away from me” more easily.

Then I had an epiphany.

When the drunk guy at the bar hitting on the meth addict becomes the voice of reason in your life, maybe it’s time to reexamine your lifestyle.

So I decided to hit the reset button. Do a 31 day cleanse of sorts to get my head right, get my tolerance levels adjusted and clear a path back to my standard binge drinking moderation. 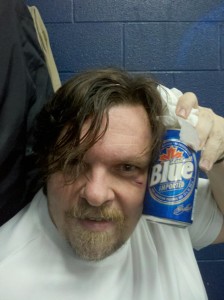 I called it Sober October.

I spent the next month booze free, drinking only water at the bar after hockey games while all my buddies tipped them back. The hardest part was handing beers around the locker room after games. Nothing has ever tasted better than a frosty cold Canadian Lager after a hockey game.

But I abstained and a funny thing happened. I felt really good.

I lost a few pounds that month, gained a little energy, started walking regularly and enjoyed 31 days without a hangover. I felt so good, I did it again in November.

By Christmas I had run a mile non stop for the first time since I was in high school.

By Valentines Day I had run a 5k for the first time in my life.

As of today, I’ve been sober and hangover free for a year.

That’s the first time I can honestly say that since I was 14 years old.

And while I’m still a fat ass, I’m in the best shape I’ve ever been in, by a large margin. I’ve weighed a little less a couple of times, and maybe I was a little stronger when I was a younger man, but I wasn’t healthy.

And I’ve never felt better, functioned better or thought clearer. I’ve started writing which has been my major life goal since as long as I’ve known what a major life goal was.

Not being hungover 3-4 days out of the week makes all that possible.

I’ve always been a drinker, but I kidded myself into thinking I wasn’t an alcoholic because I didn’t drink every day and because I had never suffered any MAJOR, DIRECT consequences from drinking. Sure I had banged up MY car once or twice. Sure I had drank myself out of my college scholarship. But I’d never had a DUI, I figured that meant I was doing OK, I knew my limits.

I was actually half drunk when I took my driver’s exam at 16. My Mom surprised me by coming home from work early one day so I could go get my license not knowing I had spent a couple of hours after school riding around East Nashville and drinking a six pack. I had a license to drive under the influence.

I wore my drinking man status like a badge of honor. Grandaddy was a drinking man. It’s a family tradition (More Hank, there). And I can quote you statistics to prove that social drinkers are more successful, more creative and make more money, not in spite of their drinking, but in part, because of it.

Most of my best friends, Who am I kidding, all of my best friends, are highly functional, binge drinking alcoholics. Drinkers always find drinkers. And being sober hasn’t stopped me from hanging out in bars with them, but it has saved me a couple of thousand bucks over the last year when the only drink on my tab has been water.

I never set out to quit drinking. I liked drinking.

But I figured out I liked feeling good better.

It took a year of being sober and hangover free to feel good enough to understand how bad I had felt for the last three and a half decades.

Not just the hangovers, but the general run down feeling that had been tugging on me like an anchor for my entire life.

So today is my first anniversary, my 49th birthday and the first day of October all over again.

And a chance for you to jump on the wagon with me.

A chance for you to find out for yourself, that if you’re willing to give up a couple of hours of “good times,” you can actually feel good ALL THE TIME.

So what do you say?

All the cool kids are doing it.