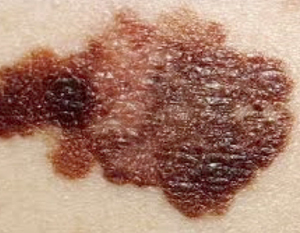 There can’t be too many things that are a bigger kick in the groin than a doctor saying the words “You have cancer.”

Except for maybe a doctor letting you know that you have cancer without ever saying a word.

I really wasn’t worried about it at all, but I had another mole on my face that I wanted removed purely out of vanity. I figured, 2 birds, 1 deductible. Why not?

So I’m sitting in the exam room, waiting on the dermatologist to come in and I pick up the brochure about skin cancer. It explains about the different kinds of skin cancer: the good kind, Carcinoma, which can ruin your day, but is highly treatable. And the bad kind, Melanoma, which is also highly treatable, IF it’s found early before it spreads beyond the skin, metastasis.

The brochure described melanoma, after metastasis, as one of the most invasive, deadliest cancers known to mankind. The tyrannosaurus rex of cancer.

And the mole on my stomach which had been growing for years looked exactly like the melanoma pictured in the brochure.

When the doctor walks in, I hand him the brochure, point to the picture and say “Doc, I’ve got one of these.”

He actually chuckled, while he was washing his hands geting ready for the exam. He tells me that melanoma is extremely rare, especially in someone my age, and he wouldn’t be too worried about and let’s just take a little look see here…

And then he stopped chuckling.

The blood drained from his face, his pupils dilated and all the air got sucked out of the room.

The knot that formed in the pit of my stomach right then didn’t loosen for years.

Turns out that my melanoma hadn’t spread yet and all I’ve got to show for it now is a giant scar on my abdomen and the CD of music I made for my funeral during a particularly bad week that summer when a misread X-ray had the doctors at Duke University convinced the melanoma had spread to my lungs.

The cancer hadn’t spread, but the idea of the cancer took hold in my brain and set up camp. There probably wasn’t a day that went by for 5 maybe 10 years that I didn’t think about having cancer.

Worrying about when it was going to show back up.

I was diagnosed when my youngest daughter was 3 months old. I had 3 children under the age of 4, and dying just wasn’t an option. But worrying was. So I worried. And I did the only thing I thought I could do to keep the cancer from coming back. I stayed out of the sun.

Now the truth is, exposure to the sun isn’t what puts you at risk for melanoma. It’s OVER exposure to the sun, sun burns, that put you at risk. And even worse, tanning beds. But with the “I’ve got cancer” knot still in the pit of my stomach, all I heard was stay out of the sun. So that’s what I did. Totally.

I was the palest white boy in the history of pale white boys.

And I was miserable.

Seasonal Affective Disorder (SAD) is a type of depression that typically occurs over the fall and winter months when people aren’t exposed to enough sunlight.

I was SAD for a decade and a half.

But sunshine makes you happy

Then a funny thing happened. I had started exercising a little, doing my own homegrown yoga/shadowboxing/tai chi/kinda, sorta regimen over the winter and, once it warmed up last summer, I took it outside.

I got into the habit most days at lunch of going outside, cleaning the pool and doing my little workout. Outside. In the Sun. And it felt good. 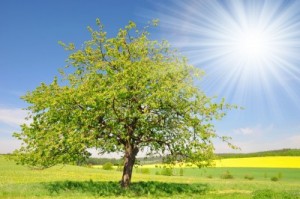 After I got over my initial fear of the sun, sometimes I would just stand there with the sun on my face, Enjoying the simple pleasure. The warm glow of now.

And I got my first tan since Bill Clinton was president.

Today, we know why.

Sunshine stimulates our bodies’ production of Melatonin, Endorphins, and Serotonin, hormones deeply entwined with our feelings of happiness, well being, and satisfaction.

Sunlight even helps control your hunger.

With extra Serotonin sparkling around your brain, you just feel more complete, more sated, and you have no need to go looking for Twinkies to scratch the itch in your head… the feeling you have when you just want something to eat, but you have no idea what it is. You can get thinner, happier and tanner in one fell swoop.

Sunlight is truly a magic pill.

The Vitamin D we get from sunshine helps improve our immune system, decrease inflammation, including arthritis, lower our blood pressure and cholesterol, prevent cavities and decrease our risk of heart disease and many forms of cancer,

Sunshine can even clear up acne, psoriasis and eczema by sanitizing mold, bacteria and viruses on your skin.

If the pharmaceutical industry could bottle sunshine and convince you that you had to have a prescription for it, there’s no telling what they would charge.

OVER exposure is still deadly and I still find melanoma to be the scariest word in the English language, but I’ve come out of the shadows.

And not nearly as pale.